Which Bees are Best for Pollinating Early Blooming Flowers, Trees and Shrubs? The Orchard Mason Bees 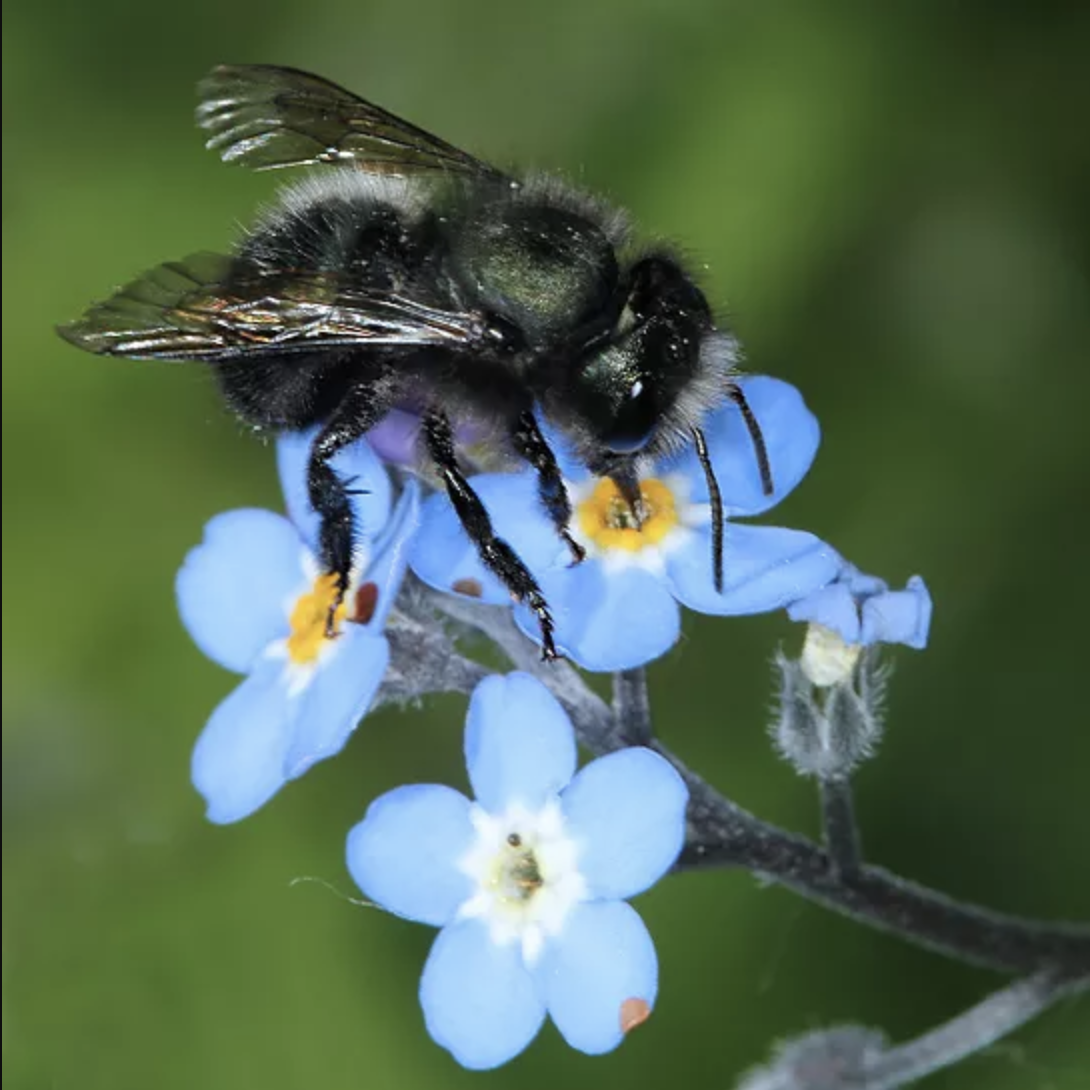 Which Bees are Best for Pollinating Early Blooming Flowers, Trees and Shrubs? The Orchard Mason Bees

The Orchard Mason Bee or Blue Orchard Bee is our Western native pollinator, which appears each year in late winter and early spring to pollinate all our early blooming fruit trees, shrubs and flowers.

Where do Orchard Mason bees live?

They are native to the United States and Canada, west of the Rocky Mountains.

They are small and solid black or bluish-black. They look somewhat like a housefly.

They are the best pollinator in the world of bees! They will pollinate effectively 1,600 flowers per day whereas a European honeybee will visit 600 to 700 flowers per day, but only pollinate approximately 30 of them (a dismal 5 percent success rate).

Why are they called mason bees?

Similar to how a brick mason uses cement between bricks, the female bee uses a layer of mud to wall off chambers between each cocoon in the nesting tube.

How do they get out of their mud cells?

By chewing and clawing their way out.

Why support mason bees in your backyard?

With many of our other native and honey bee populations in trouble due to mite infestations and pesticides, we find it even more important than ever to raise these pollinators and to provide proper shelter for them.

Do mason bees live in hives?

No, mason bees are solitary. In nature they lay their eggs in narrow chambers in the ground or trees. We sell nesting tubes to replicate what the females find in nature.

Yes, and no. They are classified as a non-aggressive bee. The males don’t have a stinger, but even though the female has a stinger, her “sting” would likely just feel like an itch if you felt it at all. A mason bee sting is

nonlethal for those who may be highly allergic to bee stings. The bee’s only interest is in food and egg production, not harming people.

How long is their life cycle?

What are mason bees’ favorite plants and flowers?

Their favorite shrub to visit in early spring is the White Pearl Pieris Japonica. They aren’t too picky as long as they have pollen and nectar. Poppies, Black-Eyed Susans, alyssum and asters are good choices to plant nearby.

When do mason bees emerge?

The mason bee cycle begins when temperatures outside reach 50-55 degrees for 3-5 days in a row, typically in late winter to early spring (February to March) depending on outside temps. The male bees emerge first followed by the female bees about two weeks later.

Why do male bees emerge first?

How does she fill the tubes?

She moves from tree to tree, shrub to shrub, thus actively cross-pollinating the flowers & fruit. Her first effort is to make 12-15 trips gathering mud to pack into her first nesting chamber as a support wall. She then makes 20 to 30 trips gathering nectar and pollen, which she packs against the mud wall. She enters the cavity and lays her first egg pushing it into the nectar and pollen mass, and then gathers more mud to close off the first chamber. This continues as she lays 30-35 eggs in her life cycle. Each 6″ nesting tube has six to eight cocoons inside.

How do males emerge first?

The mama bee determines the sex of her eggs. She lays her eggs so that the cocoons in the front two-thirds of the tube are males and the back third of the tube are females. (Isn’t that fascinating?!) The bees that will be female are more protected deeper within the chamber. After mating she carries the male’s sperm with her and only releases it to her eggs when she knows it will be safe. When sperm is released from her sack, she has created a female egg.

What do the baby bees eat?

The mason bee eggs hatch into larvae and the larvae eat the nectar and pollen that was left for them in their chamber by the female bee. The larvae spins itself into a cocoon and is fully developed by around Sept. 15th.  They then hibernate until spring of the next year.

Should I buy loose cocoons or bees still in their tubes?

Both are great options!

How are your tubes different from other companies?

We use a paper liner inside our 6″ long cardboard tube. There’s a plug on the end for easy removal of the straw liner filled with cocoons. They can then be replaced with fresh liners for the following season. Also, our cardboard tubes have a Mylar coating on the outside which helps prevent against moisture buildup. The tubes are thicker than all other tubes on the market thus preventing the Chalcid wasp from drilling through to lay their eggs within the mason bee cocoon.

Where do I place my mason bee housing?

Always place your mason bee homes in a sunny easterly or southerly location, so that they will get the early sun. They should have a little rain cover over the tubes, just so that the cover won’t block any sun but will stop some of the spring rains. Don’t make the mistake of putting your straws systems on the fruit trees: As the fruit trees leaf out, they will block the sun and your bees will not get the appropriate 50 .. 5 5 degree temperatures to be active.

• Place bee cocoons and their housing system in a sunny, elevated location. Bee shelters should be attached to a wall that gets direct sun. Loose cocoons should be hidden from predators and elements such as a hanging planter.

• Provide a clay mud puddle near housing area and keep moist. She needs mud to pack her tubes.

Make sure you have clean tubes and liners ready and in place as the females will be on the lookout for fresh nests. Keep an eye on your housing area to ensure you have enough clean tubes to accommodate your growing population of bees. *Don’t move the tubes once nesting has begun.* It will interfere with the female’s finely tuned sense of direction.

All bees should have hatched from their cardboard tubes, but every season is different. This approximate date is sometimes earlier and sometimes later depending on Mother Nature. This would be a good time to pull the old liners from the tubes, open them up to ensure all bees have hatched, replace with new paper liners, and put the houses back out on your mason bee housing wall.

The mason bee work is done for the season and next year’s bees are safely in their tubes.

• The larvae have developed into mature, full-grown mason bees in their cocoons hibernating through the fall and winter.

• Take your bee houses down and tuck away in a cool garage or shed to protect them from predators such as rats, mice, raccoons, birds, ants and other insects.

• You can perform a random sampling of your bees, by extracting cocoons from 5-10% of

your cardboard tubes with paper liners, or wooden blocks. This is to ensure you have a viable population void of mites, chalk brood a (fungal disease) or other insects laid within the mason bee tubes. Krombeini mites will appear as a mass of dried yellow powder within a sealed section of the tube. Chalk brood spores will appear as a dried black cocoon. Dispose of them from the nesting area.

• Replace the paper liners with new ones and you are ready for the new season. During the sampling, if you find few problems, you can then proceed to remove all the filled liners and replace with new paper liners for next year. Put the filled paper liners in a berthing shelter or other container and they will be ready to hatch in March of next year.

• If you’d like you can harvest all the cocoons from their liners at this time. Keep the loose cocoons in the fridge at 38-42°F with wet cloth or dish of water nearby until ready to set out in the spring.

Special thanks to Knox Cellars for this awesome information. Bee (yes, we did that on purpose) sure to check out their site for more useful information on Orchard Mason Bees! 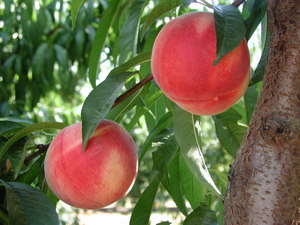 Things to Consider When Thinking About a Backyard Orchard

Backyard Orchard Culture How amazing would it be to harvest fresh, homegrown fruit straight from your own backyard?  We say, yes, please! Backyard orchard culture, especially in and around the Boise...